In my guide to strategic planning models I described Michael Porter’s Five Forces Analysis as probably the most famous of the strategy models but until now, I haven’t written about it in detail on my blog.

The Five Forces Analysis model was first introduced in the Harvard Business Review in 1979 in an article by Michael Porter called “How Competitive Forces Shape Strategy.”

It was then a major element in Michael Porter’s book, Competitive Strategy.

In 2008 Michael Porter returned to the Five Forces Model with an updated article in the Harvard Business Review called “The Five Competitive Forces That Shape Strategy.

For more than thirty years, the Five Forces Analysis has become the standard way to analyse an industry, look at changes that are taking place and to think about how a business can best position itself to defend against damaging forces and maximise opportunities where the forces are weak.

The Sources of Profit

The principle behind Michael Porter’s ideas is that profit only comes from two sources:

1. Operating in an industry with an attractive structure as defined by the five forces analysis model

2. Having a sustainable competitive advantage

In simple terms, an attractive industry is about the balance of supply and demand. If demand is greater than supply, then businesses should find it easy to make a profit. If supply is greater than demand, then the business needs a competitive advantage to survive the competition process.

Of course things aren’t that simple in the real world. Michael Porter argues that the Five Forces analysis model identifies the key factors which determine the average profitability of an industry.

The roots of the Five Forces analysis model lie in industrial economics and represent many of the key assumptions in the model of perfect competition. These assumptions keep the supply and demand within a market in equilibrium and stop firms who compete n it from earning big profits or making big losses.

The five forces that Michael Porter identified are:

These are summarised in a classic diagram. 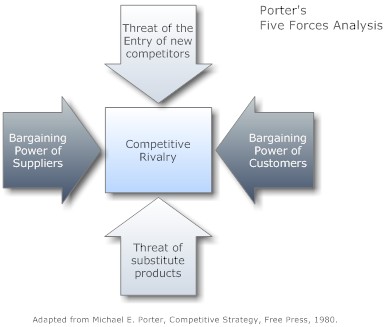 Customers, suppliers and competitors compete for the profit from the value created by the industry which is limited by substitutes or alternative solutions to the underlying customer needs.

The ideal industry structure is one where the five forces are weak:

When Is The Five Forces Analysis Model Most Effective?

I believe that the Five Forces analysis model gives more insight when you are considering entering a new market than for small businesses who are already firmly entrenched in established markets.

This is because the model helps to identify the threats to making superior profits before you’ve made the commitment.

Yes the Five Forces model can be used to identify market segments which are protected from the worst of the forces but a business can’t keep switching positions with different products and customers.

Here is a 13 minute video of Michael Porter explaining the five forces model and why it is still relevant after it was first introduced in 1979. Highly recommended.

Porter looks at how the Five Forces apply to the airline industry, which traditionally has been a very low profitability industry but which paradoxically is seen as “sexy” and attracts new entrants. The opposite example, with weak competitive forces is the soft drinks industry which he describes as a “licence to print money.”

This problem of putting the Five Forces model to work has led to people struggling to gain much insight about what to do next in their current markets.

This is partly because the model isn’t used well and the dynamics of the slow evolution aren’t captured until they speed up and hit the tipping point. It helps to use the model with PEST Analysis, both looking back over how the industry has evolved over recent years and forward as you think about how it could change, perhaps even using scenario planning. SKEPTIC is a model which combines the Five Forces and PEST.

Common mistakes to using the Five Forces analysis include:

The options to take action using what you’ve learnt from your Five Forces analysis are limited:

However, I do believe that any business that occupies a strategic position in its market should periodically work through the five forces model and see what new insights it brings.

Industry Evolution Is Monitored By The Five Forces Model

All industries and local economies are constantly evolving and Michael Porter’s Five Forces analysis model is a proven technique for analysing industries and markets so that you identify threats and opportunities early. These would be included in your SWOT analysis.

Without a framework like the Five Forces Model, it is very difficult to identify all the issues that are changing and I will be looking at the threat of new entrants, buyer and supplier power, substitutes and competitive rivalry in more detail.

The Sixth Force Missing From The Five Forces Model

Various strategies experts have suggested that Michael Porter’s Five Forces Model isn’t complete and that there is a sixth competitive force.

Unfortunately there is no agreement on what is the sixth force.

Others have suggested that government or the full PEST factors act as a sixth force in Porter’s model. Personally I prefer to look at their impact through the original five forces model.

Tony Grundy believes that the central force in the industry analysis model is not competitive rivalry but industrial mindset which is the sixth force which binds everything else together. This is interesting, especially from a differentiation perspective which requires you to challenge the traditional rules and patterns of success to find breakthrough value for customers.

Stephen Haines developed the SKEPTIC model which combines the five forces with PEST Analysis. It’s a useful concept and a memorable acronym since many people lose site of the benefits of the Five Forces analysis and PEST analysis because they are done so badly.

Michael Porter’s five forces model deals with some very big strategy issues and is therefore too complicated to deal with in one blog article.

What Do You Think Of Porter’s Five Forces Analysis Model?

Do you find the Five Forces model helpful?

Do you think there are more forces that should be included in a model for industry analysis? If so, what?

Have you done a five forces evaluation on your model and found yourself thinking so what?