Competitive Rivalry : The Most Powerful Of The Five Forces?

I’m ending my look at Michael Porter’s Five Forces Analysis with a look at competitive rivalry, perhaps the most powerful and destructive of the five forces as competitors carelessly compete away any profits and even create price wars that cause long term damage to industry profitability.

Michael Porter introduced the Five Forces model in his book Competitive Strategy and it has since become the standard way to examine the existing industry structure and how it might change in the foreseeable future.

It’s not a coincidence that Michael Porter placed competitive rivalry in the centre of his famous Five Forces diagram. 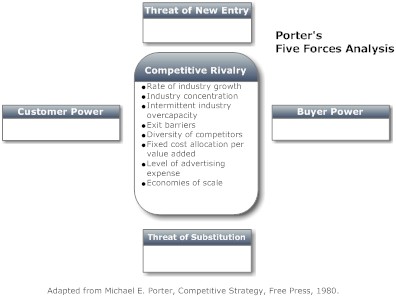 The 5 Levels of Competition

It’s easy to falls into the trap of thinking that all competition is bad but without competitors, you’ve got no one to look good against. It’s been established that it is easier to make a decision between A and B because the brain can compare and contrast than it is to decide to buy A on its own.

I recently wrote about the 5 Levels Of Business Competition which is an important framework for assessing the intensity of competitive rivalry and what you can do to move it in the right direction.

The Symptoms of Competitive Rivalry

Competitive rivalry become intense when one or more competitors either sees an opportunity to grow and acquire the customers of competitors or feels the need to attract more customers because of low profitability.

Industries where competitive rivalry is a major issue will usually have many competitors who are struggling to make an adequate return on investment so profitability will generally be low. A few competitors – those that have established competitive advantage – will make a treasonable profit but more many, intense competitive rivalry means a fight to break even and generate enough cash to survive.

This rivalry often comes through in terms of lower prices, as competitors use marginal costing to justify a contribution to overheads. However, competitive rivalry can also come through in advertising, product introductions and customer service battles.

Much of the competitive rivalry is damaging to long term profitability in the industry since it raises customer expectations of value for money although advertising can expand the market or establish differentiation through branding.

Richard D’Aveni came up with the term hypercompetition to describe situations where rivals fight hard against each other. The danger is that the firms head toward the model economists call perfect competition.

The Factors That Determine Competitive Rivalry

Competitive rivalry arises from a number of factors that work together to either give competing firms an incentive to try to break ranks or a vulnerability to the other Five Forces.

Moving from the growth to the maturity stage of the product life cycle and then into decline can increase rivalry. In the growth stage, firms get used to the business growing as more customers come into the market. However new demand eventually reaches saturation point and replacement demand isn’t sufficient to continue to provide growth opportunities. Firms will therefore look to grow through taking existing customers away from competitors.

It gets worse if the industry moves into the decline stage of the product life cycle or if the wider economy goes into recession, especially if the industry is cyclical and exaggerates the effect. Competitors will see their own sales volumes go down and in the absence of industry-wide  information, assume that their rivals are cutting prices.

High fixed costs, low variable costs and low capacity utilisation provide the economic rationale for trying to increase market share because a small increment of extra volume has a disproportionate effect on profitability. Unfortunately the reverse is also true, lost volumes in this situation has a significant downward impact on competitors’ profitability making a response the natural reaction. Price wars can develop very quickly and especially if competitors are manipulated by big customers into believing short term offers are bigger and more long term than they really are.

Competitive rivalry increases with commodity products and reduces if there is effective differentiation or switching costs. Customers have an incentive to stay loyal rather than shop around for the lowest prices.

Competitive rivalry is also a function of the competitors in the market. The most orderly markets tend to be where one has established a clear leadership position and the others are tucked in behind, taking advantage of the price umbrella established by the leader. These firms can coexist if they know their place in the market and stick to it.

However, if two or more firms are competing for market leadership and market share offers economies of scale and experience curve savings (see the Competitive Advantage matrix) then rivalry intensifies. It gets worse if competitors don’t understand each other and find it difficult to interpret the intentions of each other because of different goals. Competitors from different countries and cultures can make the existing firms particularly sensitive because of fears over low-cost competition.

Competition makes it difficult for the weak firms to make a profit. It’s therefore important that the loss-making firms can exit the market easily. If there are high exit barriers, then competition increases in a desperate fight for survival.

Michael Porter’s generic strategies offer a way out of the worst damage from competitive rivalry.

If the business is differentiated, then it effectively creates its own private market, insulated to some extent from what’s happening in the wider market. The business can’t be complacent because big changes will cause the customer value line to shift, making established positions uncompetitive without a response to improve customer value or reduce price.

If the business genuinely has a substantial cost advantage, it can afford to sell at prices that will make its competitors weep. A strong short term argument can be made for pricing based on marginal costs with its contribution to overheads but it makes no sense for any competitor to go below marginal cost unless it is desperate for cash to stave off imminent bankruptcy.

It is the businesses that are stuck in the middle that have the most strategic threat if rivalry increases.

Other Articles On The Five Forces

Michael Porter has developed the standard way to look at industry analysis with the Five Forces model.

If you are new to it and you want to understand how the forces interact, you should read the other articles:

Barriers To Entry & The Threat Of New Entrants

Have You Experienced The Damage Done By Intense Competitive Rivalry?

Has your business been caught in a price war or other competitive battle which seriously eroded profits. I’d like to hear the story so please leave a comment.

The first was a company I worked for when the recession of 1990/91 was the trigger to shift us from co-existence to conflict. WE were caught in the classic profit squeeze of falling sales volumes, price cuts and lower productivity as the hourly paid workers tried to stretch their work out to fill the week. Profits fell from £100k or more a month to a £30k loss in three months and whilst the business was restored to profit, margins never returned to the old levels.

The second was a client I started working with after the damage was done. They couldn’t understand why their accounts showed losses every month but investigation into their price changes showed that competitive rivalry from the main competitor changing its value chain by outsourcing inefficient operations had forced them to slash prices beyond a level that was sensibly economically.