The Strategic Position and Action Evaluation Matrix (SPACE Matrix) is a very useful guide to help you to decide which strategy is most appropriate in which situation.

The SPACE Matrix assesses the business across four dimensions

to come to a recommended strategic thrust which can be: 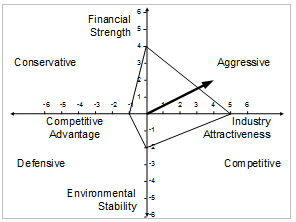 The diagram above shows favourable positions in all four dimensions and therefore the business can follow an aggressive strategy as it leverages its strengths into the opportunities available – see SWOT Analysis for how strengths, weaknesses, opportunities and threats fit together in business strategy.

The strong position in environmental stability means that the business does not have to hold back a good proportion of its financial strength to protect the business in difficult times but can be used to finance growth strategies – see the Ansoff Growth Matrix.

The business is also blessed because it has a good competitive advantage in an industry which is considered to be attractive.

SPACE Analysis recommends that businesses in such a strong position take the following actions:

This aggressive, offensive strategy will make it tough for competitors to trade and certainly difficult to build up the resources to challenge for market leadership unless they have very deep pockets.

The two big concerns in this very favourable position are:

Business strategy and marketing are often compared to military strategy with its focus on defensive and offensive strategies.

The analogy can be pushed too far in my opinion but it is useful to see how offensive strategies in warfare can be adapted to the business world.

Offensive Strategy As A Frontal Attack

In a frontal attack you would target a competitor in the area of its strengths. In the customer matrix you target the same basic value proposition using either a lower price or a large-scale marketing campaign.

If you win it’s through brute force, not subtly. The competitor immediately knows that it is under attack and is likely to respond vigorously. This makes frontal attacks very risky and often expensive.

The targeted competitor may well have the advantages of a low cost position and strong, committed relationships with customers.

A frontal attack is only a viable offensive strategy if:

Porsche have done very well by creating a new product category with the Porsche Cayenne, a luxury, extreme sports utility vehicle. With the introduction of the Kubang, Maserati have launched a frontal attack on Porsche (see Maserati Kubang.)

Offensive Strategy As A Flanking Attack

Instead of attacking a competitor where it is strong in a frontal attack, a flanking attack looks for weaknesses in the competitors product range and attacks there instead.

In the customer value map, the competitor may be attracting business it is the best option without being a close fit with the needs of the market segment. This makes it vulnerable to a flanking attack from a competitor who produces a differentiated product targeted at a specific niche. While the competitor will be aware of the aggressive competitive move, it may not be particularly concerned if little volume is looked threatened. It may decide that the size of the market is not worth the fight providing its core market position is not threatened.

The competitor may not even compete in the segment that has been attacked in the offensive marketing strategy but the aggressor may see it as a very important beachhead to move from.

Japanese cars entered both the UK and the US markets at the low price low value end of the customer value curve. Particularly in America where the incumbent cars were huge, this was a flanking attack which was ignored because “Americans don’t buy small cars.” Well Detroit got that wrong!

The same thing happened with motorcycles in Britain. The traditional bike manufacturers were happy to pull out of the low profit small bikes to concentrate on the profitable super-bikes. The Japanese bike manufacturers gradually introduced bigger bikes until the British motorcycle industry couldn’t sustain itself.

In the encirclement offensive strategy, the targeted competitor is attacked from two or more directions at once to confuse the response.

For example on the customer value map, the aggressive competitor could launch three new products:

The company that is attacked has to deal with three threats at once and if it cuts price to fight off the low priced offering, it risks the price reduction spilling over into the other customer segments.

While the encirclement offensive strategy is difficult to defend against, it is also difficult for the aggressive competitor to do since it has to be able to launch three products either at once or in rapid sequence while the competitor is still off balance.

Offensive Strategy As A Bypass Attack

In this version of offensive strategy, the aggressive competitor does not go head-to-head against the incumbent competitor but instead targets areas where it isn’t. While this isn’t a direct attack, it can be thought of as a pre-emptive strike into new markets and new complementary products (see the Ansoff Growth matrix) and is likely to be targeting the incumbent’s own offensive strategies.

I’ve read several strategy books that look at strategy as warfare which I will be reviewing over the next few months.

I have a general criticism of strategic planning that insufficient consideration is given to competitive moves and counter-moves so these ideas on defensive strategies and aggressive strategies are important.

If you are not keen on the military analogy but want a more general perspective, then Michael Porter looks at attack and defence in his book Competitive Advantage.