The bargaining power of suppliers and vendors is one of the Five Forces that Michael Porter identified that determine industry structure and attractiveness.

Powerful suppliers in the industry value chain can squeeze profits out of customers and the customers’ customers by establishing a dominant position which gives major strategic control over the entire industry. Good examples are Microsoft and Intel in the PC industry who make very high profits when other parts in the value chain struggle to make profit. 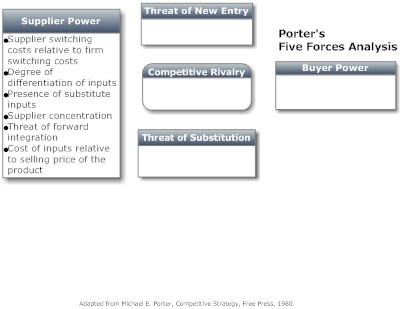 Rather than repeat what I wrote on customer buying power I thought I’d look at uses and abuses of the bargaining power of suppliers.

Uses And Abuses Of The Bargaining Power Of Suppliers

I take a very pragmatic view of what is a use of abuse of bargaining power:

It’s interesting to look at both sides of the situation like this because there is a tendency in negotiations to assume that the other person has a stronger position than they actually do. This feeling of weakness can make you concede too much too early because you fear the other side will walk away.

Using The Bargaining Power Of Suppliers To Increase Your Profitability

In this situation, you are intending to use the bargaining power that comes from your position as preferred supplier to increase your prices and capture more margin from customers without losing sales to lower priced competitors; or

Low competitive rivalry is a key issue to stop the competitive process forcing down prices.

Collusion and cartels are illegal and severely punished but some industries (which score well on the other Five Forces) settle into a comfortable existence with either businesses operating from their own differentiated positions in niche markets or, if differentiation hasn’t been established, the market share leader can set prices and enforce disciplined pricing by targeted responses.

Cyclical industries which exaggerate the effects of the economic cycle, like the steel industry, are constantly trying to balance demand and supply by increasing or reducing capacity. What is normally a buyer’s market can shift suddenly when suppliers have cut back capacity and demand starts increasing. I’ve seen prices increase very rapidly as suppliers ration out what’s available to desperate manufacturers eager to fill their own increased demand. As capacity gets added back, prices level off and then start reducing but high profits can be made in the early upswing of the economy.

Switching costs are an important issue which lets suppliers exert their bargaining power. These may be high business specific investments in equipment, technical issues that create compatibility problems with using goods from other suppliers or favourable terms of trade (e.g. extended credit subject to certain volumes, loans of equipment e.g. the freezer for ice cream).

Some switching costs create a hurdle at the beginning of the relationship as well as a barrier at the end.

Other switching costs that enhance the bargaining power of the supplier come from being excellent at what they do. The quality or service provided might become an integral part of the buyer’s own value proposition to its customers. The thought of switching to another supplier can create high levels of business risk and personal stress to the decision maker. IBM did very nicely out of the idea that “no one gets fired for buying IBM.”

Some firms will look along the industry value chain and believe there are opportunities for profit by vertically integrating forward into their buyers’ markets. There may be distinct advantages through better coordination which would give the business a competitive advantage over its customers in their markets. Suppliers can use the threat of vertical integration to exercise their bargaining power (if we don’t meet our profit targets doing what we do, we’ll have to look at competing with you.)

Defending Against the Bargaining Power Of Suppliers To Protect Your Profitability

In this situation, you are defending against the abuse of bargaining power by a powerful supplier.

An interesting example of excessive bargaining power is Premiership football in England where the clubs manage to get very high payments for TV rights but then, instead of keeping a share of this as profit for the shareholders, the money is paid out to the pampered footballers.

While businesses can’t form cartels to fix prices, employees can join trade unions and use the power of collective bargaining backed up with the threats of works-to-rule and even strikes. Businesses can form buying groups to increase their bargaining power. I’ve worked in several industries where these groups were able to establish 10% to 15% discounts compared with independents.

Buyers can look across supplier markets for alternative supplies. For example, I used to work for an electrical fittings company with an iron foundry and steel press-work. While we operated in a niche market selling to electrical wholesalers, the larger wholesalers could have gone out to the general foundries and steel fabricators and bought the tooling required to make the high volume items.

Buyers also have the option of vertically integrating backwards if they look at the make or buy decision and decide that the potential savings justify the trouble of manufacturing their own supplies.

Don’t get trapped into thinking that suppliers / vendors only supply materials and components.

It includes all costs and one of the biggest is labour which may be unionised. This can be a significant source of competitive advantage or disadvantage depending on the position of one business compared to its peers.

Unionisation may have a double negative impact on the ability of the business to compete (and to continue to provide employment):

Do You Have Other Examples Of The Bargaining Power Of Suppliers?

If you found this article on the bargaining power of suppliers helpful, then take a look at my other articles on Michael Porter’s Five Forces:

Michael Porter’s book Competitive Strategy is difficult to beat if you want to look at the Five Forces in detail and their impact on strategy. Although it is over 30 years since it was published, it is still essential reading for any strategy specialist.