by Paul Simister on November 18, 2020
in 3 – Your Strategic Positioning

It is easy to take competition for granted and not to recognise the subtle different forms that exist. I know from my experience with price wars, your actions can influence your competitors for better or worse, intentionally or unintentionally.

What is Business Competition?

According to Wikipedia competition is

“a contest between individuals, groups, animals, etc. for territory, a niche, or a location of resources.”

The Five Levels of Business Competition

The Five C’s of Competition are: 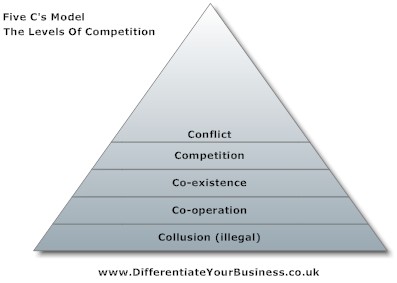 Collusion is when competitors work together to control the market supply and price by forming cartels or coming to an arrangement to fix prices.

Collusion is illegal in many countries including the UK, European Union and USA. Don’t go there. If found guilty of price fixing, penalties are harsh. The airline industry has been found guilty of conspiring together in a number of cases.

In co-opetition, competitors cooperate and work together in alliances and joint ventures but not in ways that distort the price customers pay.

The motor industry has seen companies to work together to develop new engines which gives each participant the chance to benefit from sharing costs for research and development while providing economies of scale and experience in the manufacturing stage.

There is a famous book Co-opetition that looks at how competitors can work together whilst still competing using a game theory perspective.

In coexistence, competitors don’t have a formal agreement but recognise each other’s position in the market and don’t try to compete aggressively.

A simple example would be if two chains of discount shoe stores compete in the same general geographic area. Each could have a policy that it will open new stores in towns with a  population of 20,000 or more but won’t open a competing store unless the population is over 100,000. The logic is that it is better to have a few highly profitable stores than many stores that struggle to break even.

This coexistence strategy recognises that competition can be a zero-sum game where if one wins, the other loses.

It is one of the reasons why the idea of finding a special niche can work so well. Once you establish “ownership” of a strategic position in the market, any competitor will recognise that you are established and has a simple choice:

No formal agreement is required for the co-existence level of competition to exist between competitors and to be stable. It is just common sense based around plentiful opportunities for making money.

The strategic threat is if profit opportunities dry up and one or more competitors are committed to further growth.

This is the normal situation as businesses compete head to head for customers.

Prices are kept in check by the other competitors but everyone behaves sensibly, recognising that a price war is bad for the long term profit prospects in the entire industry.

The aim has moved to making short terms profits to hurting the competition and potentially either permanent weakening them or even driving them out of business.

Price is often the common weapon but mass marketing campaigns, product bonuses and higher levels of service can all be used to slug it out.

While customers benefit from lower prices, predatory pricing is deemed anti-competitive. While legal definitions of just what predatory pricing vary – and can be difficult to prove – think of it as selling at a price below the variable cost of production.

So there we have the five levels of business competition – collusion, co-opetition, coexistence, competition and conflict.

Can you use these ideas and make money by thinking more carefully about your competition and how your competitive rivalry helps or hinders your search for profit?

A mistake I see too often is that businesses plan for growth but don’t take their competition and how they are likely to react into account. It’s therefore no surprise that this superficial level of strategic thinking and planning doesn’t prepare the business for long term success.

The Five Forces model created by Michael Porter is a very useful way to look at industry analysis.

At its core is the rivalry among existing firms which creates its own profits to compete away profits but its effects are exaggerated by the other forces. His book Competitive Strategy is an important read if you want a deeper understanding of business competition.

What Do You Think About The Five Levels of Competition?

As always I am eager to read what you think about the different levels of competition.

Do you have stories about how you have co-operated with a competitor in an alliance to create value for customers that you couldn’t on your own?

Have you been caught in a competitive conflict? I have and I’ve seen profits fall at an alarming rate as prices plummeted – each of us convinced that the other person started it that our reactions were just defending our turf. I’ve even worked for one side of a price war (as a senior manager) and later worked as a consultant in the major competitor.